[By Murray Dewhurst in Singapore]

Day 3 of the symposium was a really fun day.

Today I attended the beginning of Ch’ng Kiah
Kiean’s workshop ‘Extending & Expanding Sketches‘. He began with a PowerPoint presentation to give us some
background to his work and materials. As he announced early on ‘I use the twig!’ That’s right – he’s the guy from Penang, Malaysia who does the most incredible large widescreen drawings using a stick. 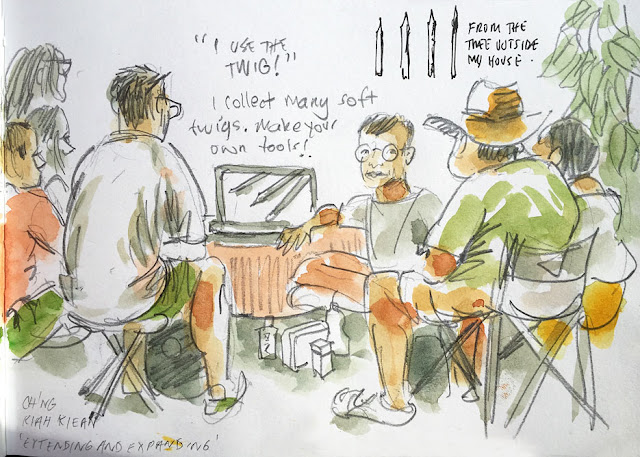 He
showed us a photo of his very own art shop — essentially the tree in front of his house – from that tree he fashions his pointed sticks to suit his
unique style, he believes that art materials needn’t be expensive — which sounds good to me. ‘Extending and expanding’ refers to his habit of adding multiple extra pages on to the sides of his sketches – the ‘A’ series of commercial papers and pads just doesn’t suit his view of the world.

Sadly I couldn’t stay for the rest of his workshop so I moved off and caught up with Virginia Hein’s workshop ‘Light and dark with a punch of colour‘ in front of the Singapore Art
Museum. Virginia’s workshop was all about about scene selection, then building the scene through lights and darks. She started by handing out cardboard
framing cards – kind of like what a movie director might use to select a scene. ‘Don’t worry about fails!’ she said, ‘I go for epic
fails’.
I captured the sketchers using her framing cards to help them
select a scene. 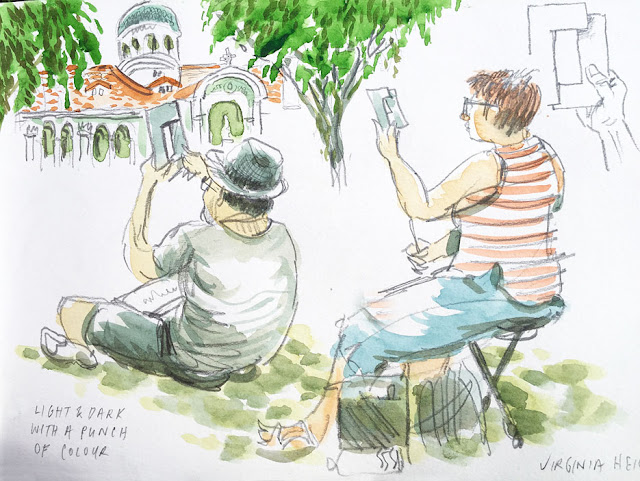 I dropped in to Frank Ching’s architectural drawing workshop. I had no idea he was such a ball of energy. Constantly moving around the sketchers with a towel draped around his neck, he reminded me of some kind of ringside boxing trainer. He says ‘The trick is stripping the scene of detail so you can see the underlying geometry’. A great sense of humour too, important I would say when you’re helping struggling students understand the difficult subject of perspective. I sketched him in just a few of the postures he assumed whilst coaching the sketchers.

Shari Blaukoph’s nearby workshop ‘Big brush capturing the first Impression‘ encouraged sketchers to put down minimal outlines then block in bold shapes first, then add the detail later. ‘…most sketchers start with line so I’m trying to get them to work the other way’. I’m definitely a put too much detail, and then add some colour sketcher so I found this quite intriguing. Here Kapil from Australia is getting his head around a different way of working… 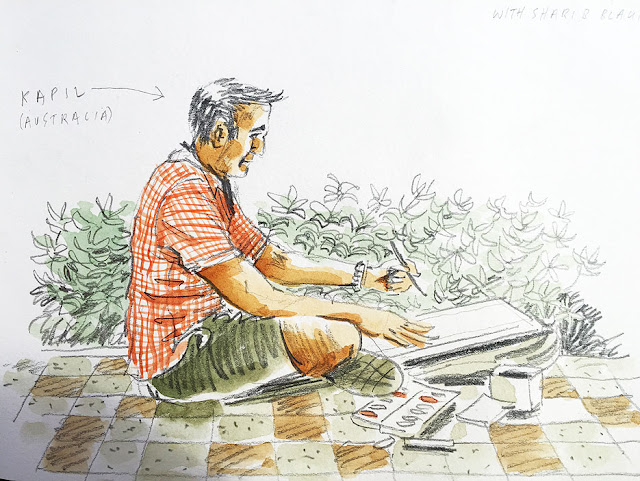 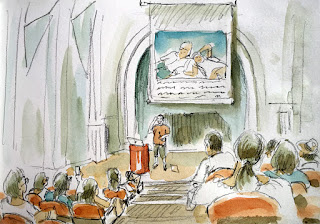 That was the end of the day for workshops
so I snuck into the auditorium back at home base to check out Luís
Simões talk on his project “World Sketching Tour – Five continents, Five years, One dream”. His story is of giving up all worldly possessions,
his day job and traveling non-stop. A great story teller, he filled us
in on some of the adventures he has had on this journey and what it means to him. 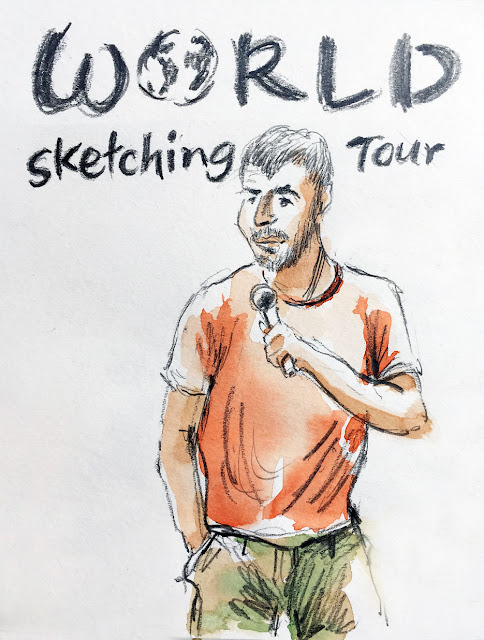 It was Gabi Campanario’s turn in the auditorium next for his lecture ‘Drawing for Publication — the triumphs and tribulations of a newspaper Sketch Columnist.’ Gabi works as a full time journalist and artist for the Seattle Times. We learned that there’s more too it than making pretty pictures – ‘It’s not enough that it is a beautiful sketch – you need a little more to make a great story’, then he took us through a sometimes funny history of his career as a sketch journalist. A word of warning though, ‘It’s a fun job but it’s very dangerous, I have been attacked by goats!’ 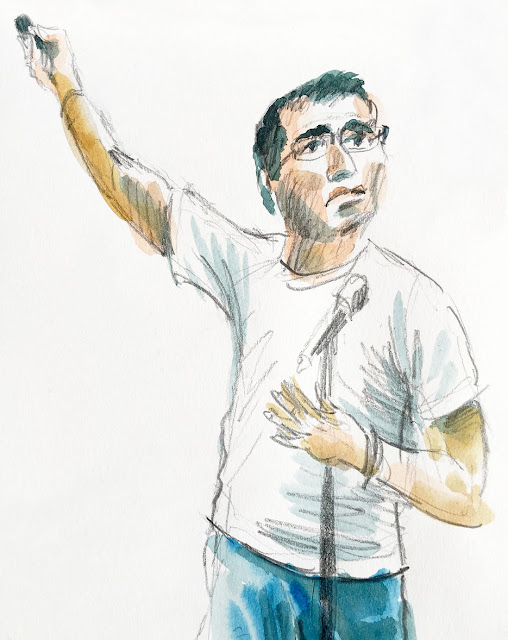 ‘Capturing mood in Watercolour Sketches‘ was the title of Zhu Hong’s demonstration, and he soon had everyone laughing with his quirky approach to adding a bit of fun to your compositions. 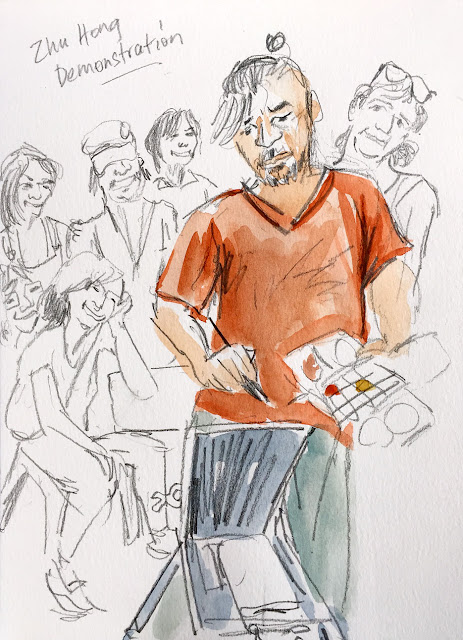 The sketching hand was getting pretty tired by the time a bunch of us hit Little India, but there was just enough time to get Birgit and Petra on paper before the Goat curry arrived. 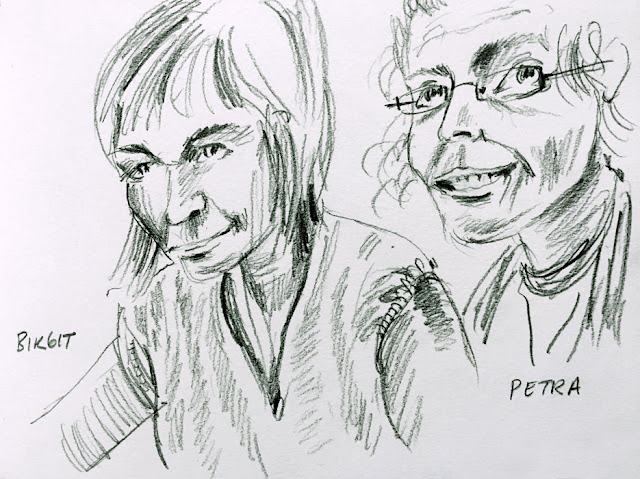