A couple of months ago, I was so happy to hear that I was going to be a teacher again at an Urban Sketching Symposium, this time in Barcelona, Spain. Arno Hartmann and I, we did a workshop proposal about drawing architecture in perspectives. Fortunately, our workshop proposal was elected to be a symposium lesson.

Now the real work began. We had to think about where our workshop was supposed to happen. We wanted to chose a place where a simple building could be seen and drawn separately without touching any other buildings in order to be able to teach perspective in a way we wanted it. Another aim was to draw not any architecture, but to draw a building with a certain meaning. After a while of debating, we chose the so called Barcelona Pavillion as the main subject for our workshop.

The Barcelona Pavilion (also known as Mies Pavilion or German Pavilion) was the German contribution for the 1929 International Exposition in Barcelona. Ludwig Mies van der Rohe, an architect from Germany who already caused sensation with minimalist housing architecture, was awarded the design of the pavilion. With its simple form, the spectecular use of extravagant materials and basic spatial elements of modern archicture (roofs, walls, pillars, glass), the Barcelona Pavilion demonstrates perfectly Mies’ idea of the flowing space. The building is silhouetted heavily against most of the other pavilions of the 1929 exposition.

As it was only a temporary building for the nine months of the exposition period, it was torn down after the show. From then on, it only existed through a couple of photos and so it could only be perceived through this kind of communication medium. Over the decades, it had become an icon for moderist archiecture; even the chairs that Mies created for the pavilion have a become a classic in the history of chair design. During the 1980s, architects and urban planners Cristian Circi, Fernando Ramos and Ignasi de Solà-Morales from Barcelona had the idea of a reconstruction true to the original pavilion. They rebuilt it on the original site (old basements were found in the ground) and established the former layout using drawings and those photos that showed also materials, furniture and proportions. Today, the pavilion is considered an accessible copy of the archetype. 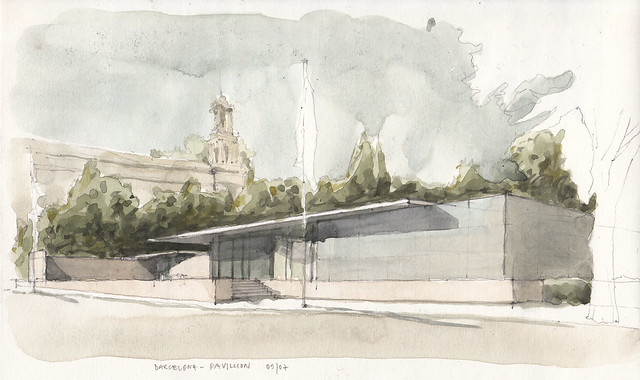 Fortunately, in these days we are able to visit this icon of modern architecture by ourselves and make our own experience with it. We do this with all of our senses, but we were there to do architectural drawings which means we perceived the architecture and produce individual drawings of it. But, Arno and I, we didn’t expect how tricky it would be draw the pavillion correctly. Before the workshop, we did some trial and error drawings of it and we realized how difficult it is to transform the proportions of the building correctly onto the paper. We felt all the more fortunate for seeing what our participants did during our workshop!

One unpleasant thing that we didn’t recognize before was the fact that our workshop was the farthest of all workshops from the CCCB, where the meeting of the symposium was. So we lost about 30 minutes each day to get to the pavillion – still a good chance to get to know our participants. We also shared our lecture notes before the metro ride.

During all three days of the symposium, we had workshops in the morning session. We were about 12 to 15 people (which is perfect for a group size with two instructors) each day. Due to the organization team of the BCN symspoisum, we could also enter the pavillion for free and draw inside. We also had an excellent interpreter, Jenny Adam from Germany, who helped us to commmunicate with the locals. I hope our workshops helped the sketchers to complete their skills and their thoughts about architecture and the display of it.

I felt so enriched to meet all those great people from our workshops seeing how they interpreted architecture in their individual way. And of, cource, any other participant, instructor, organizer etc. from the BCN symposium. I had a great time! Here’s a video documentation of the workshops where you can see some results of Barcelona Perspectives in the end: